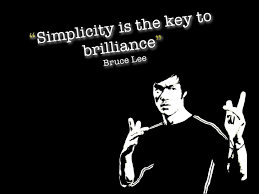 Bruce Lee used to say, "Hack away at the unessentials!". In the last 20 years, the sport of Mixed Martial Arts has done just that. From the results of this 20 year "experiment" we are left with data that is undeniable. We have before us a testing ground with which to see what works in a one on one fight with limited rules. The common denominator in these "tests" is that it is the basics which wins fights.

Any artist, no matter which field, be it music, painting, dance or sport begin their journey with basic fundamentals that every person in their respective fields need to know. A musician needs to understand the basic notes and their variants with which to form a tune. A painter needs the standard colours to paint a picture. A dancer needs the basic steps as does an athlete.

In most art forms, there often is no need to search for more, ie a new colour or a new note, yet in martial arts there is a common practice of collecting more and more techniques often described as "advanced techniques". If a musician searched for a new note outside of the fundamental A to G they would be at a loss as would a painter looking for a new colour. We are restricted to a certain degree with the limitations of the human form. For instance we are only able to see from red to violet on the electromagnetic spectrum. Other animals have a broader range though we as human beings have certain realities. This is also true in movement whether dance or sport. There are basic and most efficient ways in which the body can move.

In martial arts and especially combat sports there is a most efficient way to punch, kick, throw, submit etc. These are based on the laws of physics and can be tested. For example, boxers are the masters of punching. If there was a more efficient way to punch whether a straight punch or a hook punch, boxers would have figured it out as that is what they do, punch. The basic punches of boxing are the jab, cross, hook, uppercut and overhand with variants of each. The only difference between the Heavyweight champion of the world and an aspiring young boxer is that the champ has been doing it longer. The champ jabs, crosses, hooks, uppercuts and overhands as does the amateur. The champ has just been doing these fundamentals longer. Imagine Mike Tyson or any other champion boxer saying they already know the jab so can they learn something else! They wouldn't. Day in and day out they jab, jab and jab again as it is a fundamental every boxer needs in their tool box. It is the same in any combat sport, whether a striking art or grappling art.

Often martial artists say they know a technique yet to truely know a technique you have to have repeated it at least 10,000 times, not just seen it a few times in class. Often an eager student whose basics are not yet embedded, searches for the "secret" techniques that no-one else in class knows so he can defeat them. The issue is when his fellow athletes begin to recognise the "secrets" and then the techniques no longer work for him. The student still has basics that have not been refined while the others are improving theirs and hence start to overtake him, mainly with superior timing gained through constant repetition.

The fundamentals are learnt in the first few years of study then are trained for the rest of your journey. Yes there will always be branches off the core but the core is the same. Once the artists has the colours and basic strokes of the brush, once the musician knows the notes and how to make them on his/her chosen instrument then the fun begins! The artist mixes colours and strokes to for a unique piece of work. The musician places the same 7 notes into a different order and tempo to form a new song. The boxer, with the same punches as every other boxer, uses them in a unique way to form a unique style.

For a personal style to form, there always needs to be a firm grasp of the basics with which to express oneself, to jam if you like. In music, each individual will play their instrument slightly differntly, though those same notes are always there. In art, the same colours are there. In combat sports, the basics techniques are always there. Judo, Jiu-jitsu, Muay Thai, Boxing and Wrestling have no advanced techniques. All the techniques are fundamentals and this is evident when you watch the leading athletes in action. Mike Tyson's left hook, Anderson Silva's front kick, Neil Adams' body drop throw and Ronda Rousey's armbar are all basics.

In summary, if you are turning up to class and putting the time in you will improve and your basics will get better and better.

Just remember, the only advanced techniques are the basics done at a high level.

All the best, Neil.